PREPARATION OF KARATISTSThe three main components in karate training are kihon, kata and kumite. KIHON - development of basic karate techniques by the method of repeated repetitions. Kata - Complexes of complexly…

DEVELOPMENT OF THE CLASSICAL FIGHT DURING THE SOVIET PERIODIn 1924, the country's first classic wrestling championship was held - according to the new rules adopted in the USSR. Competitions were held in Kiev with the participation of 41… 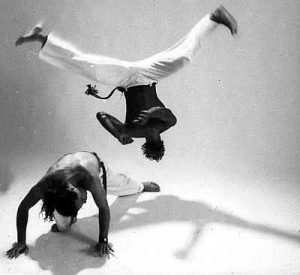 CAPOEIRA, a type of martial art. The birthplace of capoeira is Brazil. A distinctive feature of capoeira is the abundance of the most complex acrobatic elements, deceptive movements, dives, withdrawals, sweeps and hooks of the enemy’s legs, as well as a frequent change of position and complete unpredictability of the attack direction. Having made a handstand, a capoeirista can strike one enemy with his feet in the head, then, having overturned, knock another down, and attack the third directly from the ground, forming a kind of “magic circle” around itself.The technique of capoeira requires athletes to have good physical fitness, flexibility and plasticity, acrobatic skills.

As a martial art, capoeira is unique in that it developed independently, without experiencing the influence of other combat systems. In Brazil, capoeira is not only a popular sport, but also an integral element of the so-called street culture.

HISTORY REFERENCE.
In 1500, Brazil became a Portuguese colony. To work on plantations in Brazil began to import slaves from Africa. Not wanting to put up with their fate, slaves fled from the owners as soon as possible. In 1660, runaway slaves formed the so-called Palm Republic in the jungle, which for several decades successfully repelled the onslaught of the Portuguese army. It was by the middle of the 17th century. include the first mention of the martial art of black slaves. According to one version, the name “capoeira” itself comes from the word “capoeira”, which means a variety of jungle thickets. The prototype of capoeira is the martial dance, still common among the tribes living in the territory of Mozambique and Senegal. Slaves disguised their exercises in martial art as dances. Training took place to music and songs. From the outside, everything looked completely harmless: the slaves rest after work. For the time being, the owners did not even suppose that their “movable property” possessed the methods of struggle and was plotting something unkind.

Experts have still not come to a consensus on the origin of capoeira (some historians believe that it was imported from Africa in almost finished form) and the etymology of the word itself.

After the abolition of slavery in Brazil in 1888, capoeira became a national sport. In 1937, it received official recognition from the National Confederation of Sports: in the city of El Salvador, the first capoeira school, the Regional Center for Physical Culture, was registered under the direction of Master Bimba (real name Manuel dos Reis Machado, 1900–1974). The word “regional”, present in the name of the school, over time began to be used as the name of the style developed by the master Bimba. In 1941, the master Pastinha (Vincente Ferreira Pastinha, 1889–1982) founded the Angola Capoeira Sports Center. That was the beginning of the official development of yet another capoeira style – Angola. Masters Bimba and Pastinha are two key figures in the history of modern capoeira.

Since the 1950s, official competitions have been held – both among amateurs and professionals. World Championships, according to established tradition, are held in Brazil.

CAPOEIRACAPOEIRA, a type of martial art. The birthplace of capoeira is Brazil. A distinctive feature of capoeira is the abundance of the most complex acrobatic elements, deceptive movements, dives, withdrawals,…