WOMEN'S FIGHTIn some countries, various types of women's wrestling began to be cultivated long before its official recognition. In the Soviet Union, it was born on the initiative of the Honored… 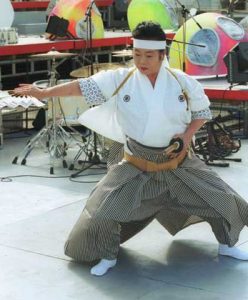 AIKIDO, a type of Japanese martial art created from several jujitsu schools; literally – the path (“before”) harmony (“ah”) of vital energy (“ki”). Aikido differs from other martial arts in its pronounced defensive character. In this system of self-defense, the emphasis is on psychosomatic relaxation, which allows you to maintain internal balance and calm in critical situations and use the attacking power of the enemy against himself. Aikido movements seem light and graceful, smooth, soft, but in reality they are filled with internal power that allows the aikido master to show strength and speed at the right time. By a powerful rotation, the Aikidoist draws the enemy into his , disrupting his balance, and, if necessary, aggravates the situation by painful action on the joints of the hands. Such a technique requires not only good physical preparation and mastery of techniques, but, above all, great psychological training, which allows you to master yourself perfectly.

Various wrestling schools existing in Japan over the centuries have been mutually reinforcing and, which is characteristic of Japan, have always been associated with a certain philosophical concept. The basis of modern aikido was the martial art of “daito aikijutsu”, which, in fact, was one of the schools of jujitsu. Aikijutsu for a long time remained a closed clan system of privileged samurai clans, carefully guarded from outsiders. Like judo and karate, aikido became known during the Meiji era (1868–1912), when the ability to earn a living by teaching martial arts pushed former samurai to reveal clan secrets.

The creator of aikido in its modern form is the master Morihei Ueshiba (1883–1969), who turned this secret martial art into a mass sport. The Ueshiba system is a complex of several thousand tricks, using mainly painful grips and “locks” of hands with a subsequent throw. Along with aikijutsu techniques, the system developed by Ueshiba was also based on the art of jiu-jitsu in the traditions of the martial arts schools of daitoryu and kitoru. Ueshiba successfully synthesized the achievements of these schools, creatively summarized the centuries-old experience of martial arts in Japan, improved many well-known techniques, bringing them into a harmonious system, created the philosophy, psychology and ethics of Aikido based on the synthesis of a number of religious teachings – Shintoism, Buddhism, etc.

Ueshiba emphasized the peace-loving nature of the art of self-defense and argued that genuine martial art should not be based on brute force that can only destroy, that only those types of martial arts that ennoble the master himself are true. The approach to this system as a specific “path” of moral and psychophysical improvement of a person is reflected in the name of the system founded by Ueshiba, in which the traditional designation of martial arts – “jutsu” (art, technique) – was replaced by “do” (path).

On February 9, 1948, the Ministry of Education of Japan gave Ueshiba permission to create the Aikikai international organization. Then the main dojo (classroom; literally, the place where the paths follow) in Tokyo was renamed the World Aikido Center.

In September 1956, the Aikikai organization held the first public demonstration of martial arts after World War II, which lasted five days and left a lasting impression on high-ranking foreign guests. 1956 can be called the year of international recognition of Aikido. Those who wanted to study Aikido gathered in Tokyo from all over the world. Like karate and judo, aikido has spread widely outside of Japan, including in Russia.