CAPOEIRACAPOEIRA, a type of martial art. The birthplace of capoeira is Brazil. A distinctive feature of capoeira is the abundance of the most complex acrobatic elements, deceptive movements, dives, withdrawals,…

MIDDLE AGESIn the Middle Ages, wrestling as a sport ceases to exist. There was no place in the Christian world or in Islamic sport. But the struggle has not lost its… 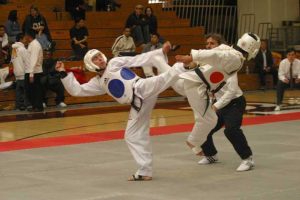 HAKWONDO (Taekwondo), a modern Korean martial art created in the 1950s based on Japanese karate and traditional Korean martial arts. The main difference from karate is a large number of kicks. The name translated from Korean means “the path of the fist and legs.” See also KARATE.

The history of Korean martial arts can be divided into two periods: before the Japanese occupation of Korea 1910–1945 and after it. What were the ancient martial arts mentioned in the Korean annals, such as, for example, Subak and Taekkuon, is hard to say now. During the 35 years of occupation, many traditions have been lost. After the Japanese left in 1945, a real boom in martial arts began in Korea. In most areas of hand-to-hand combat, the technique of Japanese martial arts was passed out as ancient Korean.

In 1953, Hwang Ki, the head of the Mudukkwan school, tried to combine these areas into a single organization – the Tansudo Korean Union (corr. “The Way of the Tang Hand”). However, the young lieutenant general Choi Hong Hee, a representative of the Odokwan school, went even further and proclaimed the idea of ​​merging schools and creating a single style.

In April 1955, at a congress of school principals Chandokwang, Sonmukwan and Odokwan, it was decided to name a new martial arts Taekwondo. In September 1961, the Korean Taekwondo Association appeared, and in February 1962 she became a participant in the competitions of the Korean Amateur Sports Association. In the 1960s, a tour of a group of taekwondo masters with demonstrations took place in the USA, Thailand, Malaysia, Vietnam, countries of Western Europe and Canada. In 1963, a Taekwondo demonstration was held at UN headquarters.

Heading the Korean Taekwondo Association, Choi Hong Hee in 1966 created the International Taekwondo Federation (ITF) and became its president. A year later, for political reasons, Choi Hong Hee left the Republic of Korea and moved the ITF headquarters to Toronto (Canada). Some of the leading instructors left with the general.
The taekwondo masters who remained at home received state support and in 1972 the Kukkivon Palace, the World Taekwondo Center, was opened in Seoul, where the first Taekwondo World Championship was held in 1973, and then the World Taekwondo Federation (WTF) was founded, of which President was elected Kim Un-young. Since 1973, taekwondo has become part of the compulsory school curriculum in South Korea.

Choi Hong Hee and the ITF could not count on Seoul’s support, so they had to turn to Pyongyang for help. The ITF version of Taekwondo development has given the DPRK government about the same importance as the Republic of Korea government – the development of the WTF Taekwondo version. However, the financial support of taekwondo in North Korea left much to be desired. On the issues of redistribution of funds within the federation, conflicts arose, and as a result, a new split occurred. ITF headquarters moved from Toronto to Vienna, Austria, and the remaining masters in Canada established the Global Taekwondo Federation (GTF) in 1990, led by Park Jun Tae, until then chair of the ITF technical committee.

Meanwhile, the WTF leadership set the goal of turning Taekwondo into an Olympic sport. In September 1988, during the Olympic Games in Seoul, taekwondo was adopted as an indicative species, and in September 1994 at the assembly of the International Olympic Committee in Paris, Taekwondo WTF version was included in the program of the Olympic Games (since 2000).