AIKIDOAIKIDO, a type of Japanese martial art created from several jujitsu schools; literally - the path ("before") harmony ("ah") of vital energy ("ki"). Aikido differs from other martial arts in… 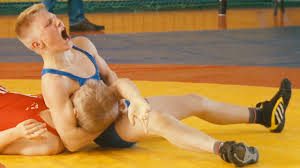 Freestyle wrestling in the international arena began to be cultivated later Greco-Roman. England is considered her homeland, where already in the XVIII century fights were held, reminiscent of the fights of modern wrestlers. Over time, this struggle was brought to the United States, where it gained immense popularity. In America, wrestling, cultivated primarily in colleges and universities, began to develop in two directions: as free-style wrestling according to international rules and professional wrestling – wrestling. In addition to the United States, freestyle wrestling was most widespread in the countries of Asia and the Middle East, while in Europe, “classics” were clearly preferred.

At the beginning of the XX century, the rules for conducting freestyle wrestling competitions were approved. In 1904, she – at the insistence of the owners of the next Olympics – was included in the program of the Games in St. Louis (USA). Only Americans (nearly forty people) participated in the Olympic wrestling tournament, and, naturally, they got all the medals. However, a start has been made. With the exception of the 1912 Games in Stockholm, freestyle wrestling is invariably included in the Olympic program. The USA is traditionally strong in this sport: from 1904 to the present, they have won more than one hundred Olympic medals – more than any other country. It is noteworthy that in our country this style of struggle until the end of the 40s. last century and was called: “free American wrestling.” Over time, Soviet athletes, as well as wrestlers from Iran, Turkey and Bulgaria, made decent competition to the Americans, after the collapse of the USSR, Russian and Georgian wrestlers.

European freestyle wrestling championships have been held since 1928, and world championships since 1951. At present, both the world and European championships are played out annually, however, the World Championship is not held in the year of the Olympic Games.